All That Boerne Has to Offer

There is no denying that the conveniently accessible Hill Country spot of Boerne is quickly growing. The following establishments and the women behind them underscore that fact with what their businesses bring to the area and the vision they have for this not so little town’s future.

Joi Sanders
The Shops at 153 Main

For some people, less is more, but for Joi Sanders and her husband, Guy, they are bringing so much more to downtown Boerne. As owners of the Shops at 153 Main, they have transformed a building to bring not just one but four new spots to its popular Hill Country Mile. The space is now home to a bakery, Bakhaus; a wine and beer bar, Cork and Keg; a restaurant, The Richter Tavern; and the forthcoming private club, Oben. These new fixtures of downtown Boerne took over a building steeped in the town’s history. The building dates back to 1918 and was Boerne’s first car garage run by Arno Richter. He worked on Model T’s there, and it would eventually become a car dealership, the first Jennings Anderson Ford. And Sanders prides their work in maintaining the historical footprint of the building.Her journey with The Shops began three years ago when they first purchased the building. She explains how their idea to do a restaurant and bakery, including their decision to take over the wine and beer bar, arose in an organic fashion. It all came about through talking with the people of Boerne to learn what they would like to see in their hometown. Her days in running The Shops consist of ever-changing roles, and with Richter Tavern set to open in the spring, design and interior work has been her principal role of late. She also works with wine and alcohol reps, plans events, collaborates with others in the community, and doesn’t shy away to jump in and help with less demanding tasks such as washing glasses. It’s a far stretch for someone who comes from a background in Clinical Laboratory Science, but she always knew she wanted to go into the restaurant business. She even teased that she is a culinary school drop out, but her time and energy was needed more for the businesses. With her efforts spent in working with the community through the Boerne Chamber of Commerce and the Hill Country Women in Business, it has proven to be instrumental in the decision making for their establishments. It was here where they learned people wanted a place they could visit any day of the week and at later hours. She shared how it is all done with Boerne and its citizens in mind, “We want more people to come here, we are into promoting all the businesses.”

The William Hotel in downtown Boerne not only offers a chic respite in “Hill Country elegance” for those that want a getaway or a staycation along the Hill Country Mile, but it also highlights a state of mind for guests and visitors who come to the boutique hotel. It’s something its Chief Marketing Officer/Owner, Scarlett Ramey, has wholeheartedly taken upon herself to relay to the people of Boerne and those who come for visits to the fast-growing town. Ramey is a Seattle native but came to the area to be closer to her parents, who purchased The William a couple of years ago. She began taking over management last April and confessed how she has zero experience in the hospitality industry. That has not been a deterrent for her, but in fact, created the opposite effect in fueling the passion for her role there at the hotel. In Seattle, her background began as a registered clinical dietician, and she later owned an eating disorder clinic. She now pours enthusiasm into promoting self-care and living your best life through her work at the hotel using it as a platform to help others. It has allowed her to do some fun and interesting things that Boerne hasn’t seen before, such as playing a key part as host for nonprofit events. Back in August, The William hosted the charity event, “Fashion in the Hills,” a New York style fashion show to benefit Emma Faye Rudkin’s Aid the Silent non-profit. Over 400 people attended and over $200,000 was raised for children who are deaf and hard of hearing to help with the costs of hearing aids. Ramey explained how she loves throwing events and raising money for nonprofits, “I love using our name to raise awareness for people who need it.” Her ability to do these types of projects would not be possible without the support of her team at the hotel. With a schedule filled with days away from the hotel to meet with people and take care of its marketing needs, she relies heavily on her small team of five. She specifically credits Stacy Champ and Lindsey Hayden with handling the day-to-day needs of the hotel, giving her the time and energy to focus on ways the hotel can extend its community outreach. She loves the town and the people and enjoys looking for ways to help and serve others through The William Hotel.

In the Texas Hill Country, nothing goes better with good food than cold drinks and live music. Tyler Fuller, her husband Brandon, and their two partners have come together to highlight all of that with the revamped Dog & Pony Grill of Boerne. The restaurant opened its doors in May 2019 under their new ownership with a whole new look and feel.Its changes can be seen from the moment you walk through its doors down to its outdoor seating area complete with a new, larger patio and a full bar. It provides a little bit of everything for everyone. Families will find it as a haven for dining to let the kids play in its playground area, and others will enjoy the music entertainment they bring in two nights a week. Fuller explains how the size of the outdoor space and the stage was a good opportunity to help the restaurant transition from day to night, which is something they wanted to do and is unique to Boerne. In her self-proclaimed “behind-the-scenes” role, she does everything from invoicing, to event planning, purchases, and any other emergencies that come their way. In January, she was preparing for their first big music night of the year, hosting the country music artist, Roger Creager, in conjunction with the Boerne Booster Club. Her hope is to host larger ticketed events for fundraisers such as this recent one four times a year. And while she described her out of sight role, she was quick to place Brandon at the forefront of it all. She explained how he has always been great with food, describing encouragement from friends to open a place of his own. For her, it is a dream come true to see him execute his passion while she has the opportunity to fall back on her past experience in retail management to use her eye for merchandising and decorating. She has not only enjoyed seeing their dream come to fruition but is also loving how they have created a leisurely dining experience there in Boerne. It’s a spot where there is no rush and hopefully, it can serve as a place where families and visitors can make memories. She just hopes people walk away with more than what they came in with, “I really want people to leave with happy hearts and full bellies.”

This article was originally published in San Antonio Woman Magazine 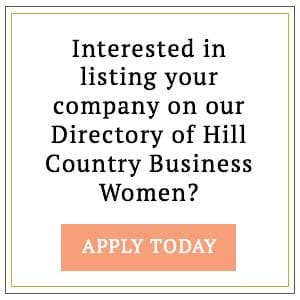